Including gallery walks in my lessons allows students to move around the classroom and talk to each other about the math. It is not developmentally appropriate to expect seventh graders to always stay seated in their seats for 8 hours a day, so incorporating some movement in the math classroom helps them stay alert. Additionally, students learn best by talking through concepts with their peers and teaching each other.

For example, in my math intervention class, I did a gallery walk where students were given algebraic expressions and they had to figure out which of the scenerios posted around the room matched the expression. The novelty of movement got many students engaged in the activity, and students were using their higher order thinking skills to figure out which scenerios matched and why.

Students working in small groups on gallery walk. This group includes one high SPED and one low gen ed student. 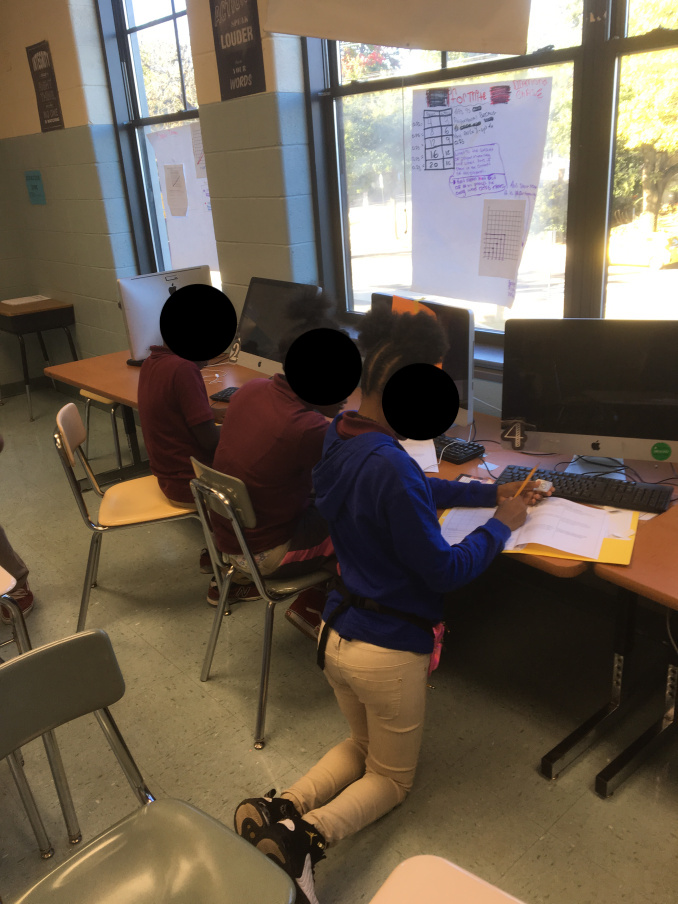 This student was not precise enough in their mathematical reasoning, but did have the correct general idea. 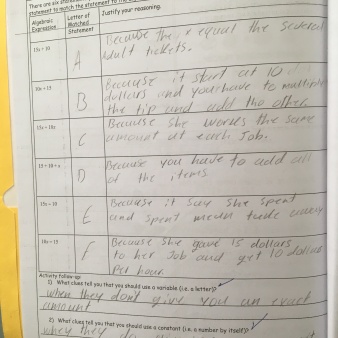 This student could still be more precise in their mathematical reasoning, but also had the right idea. 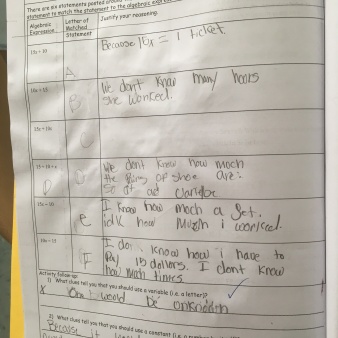 This student correctly identified they wanted to include variables when they don’t know precise quantities, but did not justify one of their answers and did not always use complete sentences.

This student did not understand the assignment and was pulled for small group reteach the next day.

Students had varying levels of rigor in their reasoning, and we later discussed what reasoning they should have had in the work. Some students failed to justify their reasoning for their last station because they have already matched the rest, or used vague reasoning such as “we added it together”. Nevertheless, the activity sparked a lot of math talk between students. Afterwords, we brought it together by discussing what clues in a math problem tell us a variable or a constant is needed.

For reference, the correct answers to the gallery walk. These statements were intentionally chosen to bring up common student misconceptions.